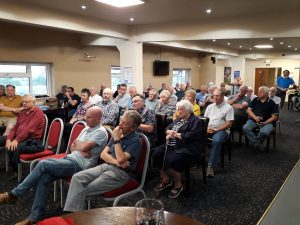 By Gary Nunn on behalf of the Supporters’ Club

Over forty fans attended the recent Fans Forum for Salisbury FC on 22 August in the Blue Bee Bar.
On the top table to answer the questions there was Steve Claridge, Manager and two other board members, Chairman, Ian Hammond, and Jeremy Harwood.
The questions were mostly about the current state of play with the first one to SC being “Why don’t you play two up top?” Steve explained that by doing so it leaves the midfield exposed and we have achieved over 100 goals each season with only one striker, so the formula must be good. Other questions varied between a who is the best captain, is there a replacement goalie, what about Referees decisions, more social occasions to attract the younger audiences, special prices for the Forces and the ever popular increasing cost of coffees at the tea hut!

Mr Claridge answered all the questions honestly and with conviction, with the other two Board Members assuring us of the tenure of the Ray Mac Stadium and the long-term future of the club. I cannot write down all the answers that were given, but if you were interested in your club, you should have been there! The fans that attended were well satisfied with the comprehensive answers and re-assured that every decision happens for a reason and for the benefit of the Club.

Steve Claridge did say he was always available to chat to anyone about football matters as long as it is not a personal attack which there have been many adverse online discussions of late. He finished by dismissing the vitriol he had received on social media and urged critics to come out from behind the keyboard and talk face to face. This caused the audience to respond with a spontaneous round of applause.

All in all, the fans of Salisbury FC have a very good stable, ambitious club to support with an excellent management team who all give 100% for no return except the promotion of the Club for the fans.

This website uses cookies to improve your experience while you navigate through the website. Out of these, the cookies that are categorized as necessary are stored on your browser as they are essential for the working of basic functionalities of the website. We also use third-party cookies that help us analyze and understand how you use this website. These cookies will be stored in your browser only with your consent. You also have the option to opt-out of these cookies. But opting out of some of these cookies may affect your browsing experience.
Necessary Always Enabled
Necessary cookies are absolutely essential for the website to function properly. This category only includes cookies that ensures basic functionalities and security features of the website. These cookies do not store any personal information.
Non-necessary
Any cookies that may not be particularly necessary for the website to function and is used specifically to collect user personal data via analytics, ads, other embedded contents are termed as non-necessary cookies. It is mandatory to procure user consent prior to running these cookies on your website.
SAVE & ACCEPT