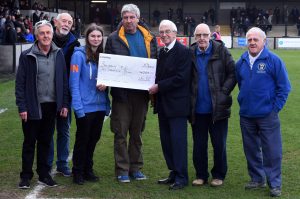 On Saturday 9th March, during the Kings Langley game, The Supporters’ Club presented Chairman Ian Hammond of Salisbury Football Club with an amazing cheque for £6,000. The photo by Roger Elliott shows Supporters’ Club Committee members (left to right) Trevor Purse, Keith Gale, Leona Clubb, Kevin Clubb, Chairman SFC Ian Hammond, Supporters’ Club Chair Gordon Plumb and Ray Neal. Congratulations to the Supporters’ Club and to all the fans and supporters who contribute each week to the 50/50 fund and other fundraising efforts. Well done everyone!

This website uses cookies to improve your experience while you navigate through the website. Out of these, the cookies that are categorized as necessary are stored on your browser as they are essential for the working of basic functionalities of the website. We also use third-party cookies that help us analyze and understand how you use this website. These cookies will be stored in your browser only with your consent. You also have the option to opt-out of these cookies. But opting out of some of these cookies may affect your browsing experience.
Necessary Always Enabled

Any cookies that may not be particularly necessary for the website to function and is used specifically to collect user personal data via analytics, ads, other embedded contents are termed as non-necessary cookies. It is mandatory to procure user consent prior to running these cookies on your website.